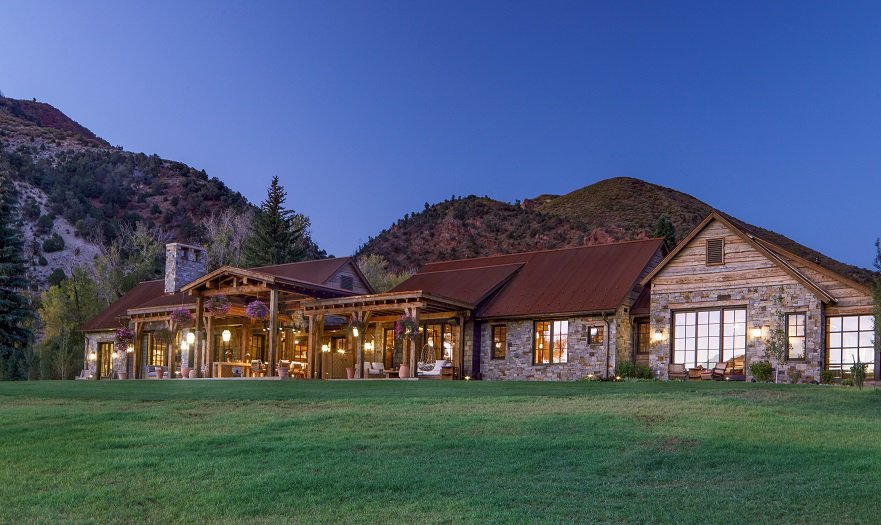 If you’re a fan of the mountain farmhouse aesthetic, you’re in for a treat. Nestled into a hillside just minutes away from Aspen core sits the Mount Daly House, one of the eight modern ranch retreats at the 800-acre Aspen Valley Ranch.

The massive Colorado ranch — owned by oil and gas executive Charif Souki — was initially listed back in May 2020 for $220 million, which propelled it to the top of the list of most expensive residential properties for sale in the U.S.

Since then, marketing efforts for the property, led by Souki’s son, Chris Souki, along with Carrie Wells (both with Coldwell Banker) have shifted, with the massive ranch being divided into more manageable assets. One of which is the biggest home on the ranch, Mount Daly, which has been listed alongside a future homesite (so far simply titled Lot 9), which has a 13,000-square-foot proposed floorplan that would outshine all the other existing homesteads on the property.

The asking price for the two properties — Mount Daly and Lot 9, the future homesite of a 6-bed, 9-bath dream ranch home with a generous 13,000-square-foot floorplan — is a whopping $30 million, but that’s not above the mark for properties in the area, especially considering that the lots total 82 acres (in what’s undoubtedly a phenomenal location).

Best of all, the home rests on the valley floor at the confluence of two mountains, offering some of the best Elk Mountain range views. The massive windows carefully placed throughout the home make the most of these views, and invite calm and relaxation.

Charming Estate With Ties to The Beatles On the Market in Connecticut
This Stunning Modern House Was Built With Fire Safety in Mind
New Jersey’s Gloria Crest Estate, Once Home to Hollywood Silent Film Starlet, Is on the Market
Morgan Brown Re-Lists Stunning West Hollywood Home Amid Split from Actor Gerard Butler