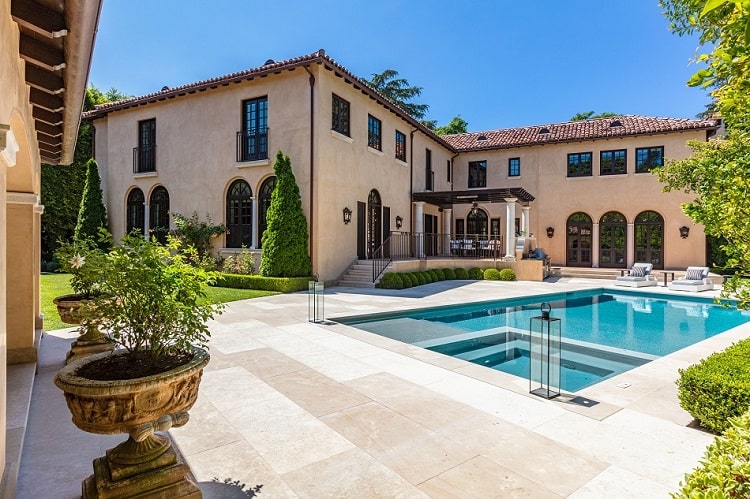 Miriam Schaeffer, a former executive at nail polish giant OPI Products, is looking to sell her Italian-style villa in Beverly Hills, CA — and won’t settle for just any amount.

The nail polish mogul — who is also the former wife of George Schaeffer, founder of the popular nail polish brand — is asking a hefty $33 million for her opulent home set in one of the most sough-after streets in the area, Roxbury Drive, a historically popular address among celebrities.

Located on N. Roxbury Drive, the property has a rich history and has been considerably upgraded and expanded in recent years. In fact, Schaeffer invested heavily in the property, expanding its footprint by roughly 40% and significantly boosting the amenity roster.

Originally built in 1926 by the architectural firm Camduff and Camduff as one of the partners’ own homes, the architectural masterpiece was revamped by renowned architect Richard Manion in 2016. The current owner worked alongside the architect to add amenities like a media room and a wine cellar, and to expand the beautiful grounds.

The combination of Spanish, Italian, and Mediterranean revival architecture is probably why this property is also known as Casa California. It’s a perfect representation of relaxed California living, featuring a long list of fun amenities that includes a fitness studio, a media room, a spa, and a swimming pool.

The property offers roughly 210 feet of frontage along N. Roxbury Drive, also known as ‘street of the stars’ (a highly popular destination for celebrities living in Beverly Hills), but it also offers privacy from prying eyes via a gated and hedged entrance.

The mansion has 7 bedrooms, 13 bathrooms, and an impressive total of 13,765 square feet of living space. The rear grounds are home to the pool, the spa, a guest house, and a fitness studio, all surrounded by complete privacy and tranquility.

Inside, a two-story entry greets visitors, leading to a living room with a stunning fireplace and doors that open to the front grounds. There is also a state-of-the-art chef’s kitchen, complete with a breakfast room and a wood-paneled family room that opens to the pool.

Upstairs, there is a gorgeous master suite that incorporates a sitting room, custom-made closets, and a terrace with fabulous views. There’s no shortage of space for family or friends, as the upper levels also include no less than 5 guest suites.

Additional amenities include a wine cellar, an elevator, an entertainment room, and a bar, making this house perfect for any type of entertaining.

This luxurious N. Roxbury Drive property is marketed by The Agency, with Jacob Dadon handling the listing. The current owner is Miriam Schaeffer, the former wife of George Schaeffer, who founded the popular nail polish brand OPI.

Schaeffer bought OPI (then Odontorium Products Inc.) in 1981 in Calabasas. At the time, the company was in the dental supply business, but Schaeffer and partner Suzi Weiss-Fischmann turned the brand into a global nail polish giant. The brand’s products were used in movies like Legally Blonde 2 and Alice in Wonderland, and they are known for their chip-resistant formula and bright colours. The company was acquired by Coty, Inc. in 2010, and Schaeffer stepped down as CEO in 2013.

Miriam Schaeffer, George Schaeffer’s ex-wife, once worked as an executive and treasurer for the brand. She reportedly purchased the opulent house in 2012 for $14 million, according to Mansion Global, and invested in expanding its footprint by nearly 40%, alongside architect Richard Manion.