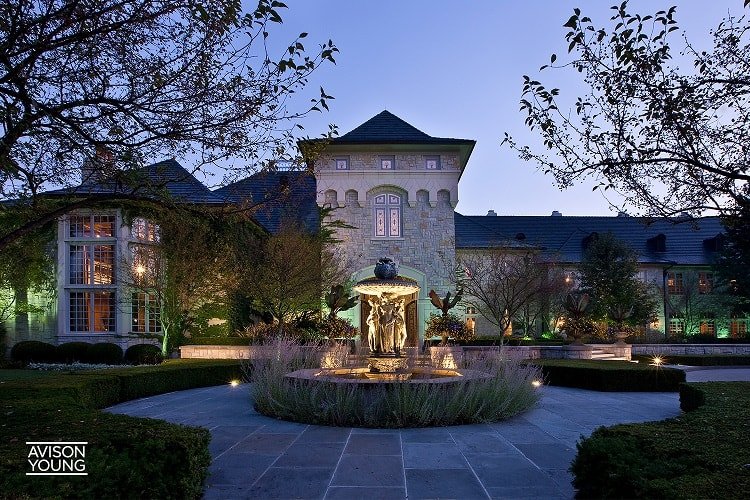 Asherwood, the suburban Indianapolis estate of the late billionaire Mel Simon, has reportedly found new owners. The Current, a local publication that reports on the Carmel area, has learned that the massive property will be divided in two and sold to different buyers for an undisclosed amount.

The opulent main house along with 20 acres that surround it will go to a private buyer (who will use it as a personal residence), while the rest of the 107-acre property goes to Gradison Land Development. The latter has already filed plans to built 40 homes on the sprawling property.

As a quick recap, the famous property — valued at $30 million — was most recently listed in March 2019, following its previous attempt to sell in 2014 which ended with Bren Simon (wife of the late shopping-mall magnate and Pacers co-owner, Mel Simon) donating the 107-acre estate.

In late 2018, the foundation led by Grammy-nominated musician and historian Michael Feinstein sought bids from top real estate brokerage firms to advise it on the best ways to market and sell the property. The winning bid went to global real estate firm Avison Young, chosen to lead sales efforts for the 107-acre property in Carmel, IN — an inspired choice, given the recent news of the successful sale.

“We invested a lot of time and effort in evaluating options to maximize the potential of this property, not only for our organization but for the surrounding community,” the foundation’s executive director Chris Lewis said in a statement. “We want to honor this generous gift by opening the opportunity to prospective buyers who are able to elevate the grounds beyond our capabilities.”

Stan Burton, an associate in Avison Young’s Indianapolis office, was leading the efforts of coordinating the sale of the Asherwood Estate.

History of the Asherwood Estate

In the years following their purchase, Mr. Simon, the co-founder of the Simon Property Group, became one of the world’s foremost shopping mall developers and the co-owner of the Indiana Pacers basketball team. When he died in 2009 at 82, Mr. Simon was worth $1.3 billion, according to Forbes.

Mr. Simon’s widow, Bren Simon, listed the property for sale in 2014 for $25 million, with no takers. She then donated the massive Asherwood estate, along with the house and all of its belongings, to Michael Feinstein’s foundation, The Great American Songbook.

The millions of dollars worth of art, furniture and fixtures that were inside the palatial 50,000-square-foot mansion hit the auction block on November 17, 2018 with proceeds from the sale going to the foundation.

A real-estate deal to redevelop the vast estate into a luxury neighborhood and transform the seven-bedroom mansion into a boutique inn was also underway at the beginning of 2019, but was later abandoned due to restrictions that prevented the development of large-scale homes on the estate.

Note: A previous version of this article was published in March 2019, when Asherwood Estate was listed with Avison Young. It was updated in 2021 to reflect the recent news surrounding the property’s imminent sale.

“Neverland” No More! The Sycamore Valley Ranch is Much More than Michael Jackson’s Former Home
The Iconic Beverly House: where Jackie O & JFK Honeymooned, ‘The Bodyguard’ was Filmed, and where Beyonce Shot ‘Black is King’
New Jersey’s Gloria Crest Estate, Once Home to Hollywood Silent Film Starlet, Is on the Market
The Story of the Opulent $120 Million Manor that Aaron Spelling Built in Holmby Hills